This year's show had a different feel.  It was more somber, yet set the right tone in the wake of the Vegas massacre.

Eric Church opened the show with a touching version of Amazing Grace, followed by every star of the show performing Hootie and The Blowfish’s “Hold My Hand”.

Brad Paisley and Carrie Underwood had another great opening monologue, with Tim and Faith teasing them about their 10 Years as hosts (giving them Brad and Carrie Barbie Dolls).

Keith Urban has a surprise win for Single of the Year with “Blue Ain’t Your Color.”

Eddie Montgomery (from Montgomery Gentry) was joined by Rascal Flatts and Dierks Bentley for “My Town”, in a tribute to the late Troy Gentry.

Brother’s Osborne paid tribute to Don Williams singing “Tulsa Time”.  (They also won for “It Ain’t My Fault” for Video of the Year and Vocal Duo of the Year).

Tim and Faith killed it on their new song “Rest of My Life”.

Miranda Lambert wins for 7th time as Female Vocalist of the Year.

Garth Brooks walks away with Entertainer of the Year for the second year in a row.  I prefer to focus on that aspect of Garth's evening. 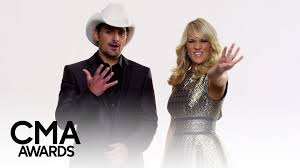 (My wife says the men were better dressed tonight than the women, do you agree?)
Posted by Joel Raab at 10:09 AM No comments: