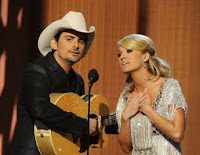 Brad Paisley and Carrie Underwood did the best job anyone has ever done hosting that show. They were everything you wanted in hosts. The Tim and Faith Barbi doll segment is a CLASSIC!

Great to see Taylor Swift win Entertainer of the Year. She's done more to help Country music and Country radio than she gets credit for through the halo effect of her mass appeal popularity.

Zac Brown Band should have won SOMETHING for the great year they had. That said, I wished they had performed one of their great songs instead of "Georgia On My Mind".

Why do some artists get two turns - while many worthy ones get none? Just askin'??

Too bad the Hall of Fame has become an afterthought. Not even a picture of the winners. Seems like lately other genres are doing a better job honoring their pioneers.

Now, we should start a Facebook page to lobby for Brad and Carrie to host the Oscars!
Posted by Joel Raab at 1:54 PM No comments: