As you can see, I haven't blogged in several years.  Merle Haggard has inspired me to do so once again.  Merle (along with Johnny Cash) IS the reason I fell in love with Country music and later, Country radio.  He could do it all.  Write, sing, perform, even produce. Merle was a great collaborator with Willie Nelson and others. He did it his own way, sometimes to his own detriment.  I can't believe it took until 1994 for him to be inducted into the Country Music Hall of Fame.  Seriously?  I had two brief encounters with the man prior to shows.  Once early in my career, and later in 2013.  As you can see from this picture, he looked you in the eye and made the moment count.  This picture is one of my most prized possessions.  When he saw the picture again in 2013, he remarked, "you've aged better than me". 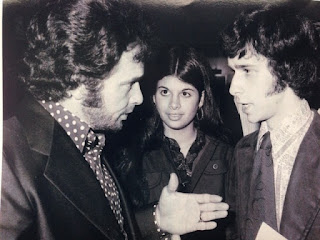 While I feel sad, I feel honored to have grown up with Merle's music and his presence in the world which will never be replaced.  As Eric Church said in a recent song, "I Pledge Allegiance to the Hag".
Posted by Joel Raab at 10:02 AM 2 comments: